In a China city, 7 huge pumping stations went on line pumping wastewater to Pudong for final treatment before being discharged into the East China Sea. These pump stations are part of the 6th phase of the city’s wastewater treatment plan.

A SCADA system was installed as part of the new plan to control, collect, and monitor data from the 7 pump stations. The DNP protocol is used by the Master to communicate to all the stations, which include both Allen-Bradley® and General Electric equipment.

Water management is a major issue in China. Sixty percent of China’s land mass and half of its population only receive 20 percent of the nation’s water resources. In addition to this uneven distribution, soil erosion, deforestation, land conversion, excessive water usage, drought and inefficient or non-existent wastewater management have caused China’s government to recognize the vital need to address these problems in order to maintain the nation’s development.

The Master station, using MITS’ MOSAIC data acquisition and control technology, communicates to both Allen-Bradley and General Electric hardware. Many water control systems are PC-based and require a high level of manual intervention, but the MITS system is highly automated. While monitoring the passage of water, automatic adjustments can be made to make the most efficient use of energy and pumping equipment and pinpoint problems in emergencies. 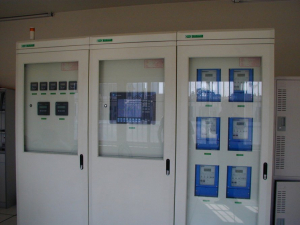 Since both General Electric and Allen-Bradley equipment were used in the plant, a DNP interface was needed to allow them to communicate with all of the DNP compatible end devices. The local Rockwell Automation office touched base with the company’s Water Industry Solution Center in the United States and was advised to contact ProSoft Technology.

“Since ProSoft’s DNP module has two communication ports. The end user was able to install a PLC-5® backup system as well as a redundant communication system,” said the ProSoft Regional Sales Manager who worked on the application.