Not Your Typical Water Department

In an Illinois city, the water department’s 28 employees were scrambling to meet the needs of their consumers. The treatment division’s responsibilities included the operation and maintenance of fourteen wells, a lime softening treatment plant, three booster pumping stations, four elevated tanks, and one ground storage reservoir. The distribution division was charged with operating and maintaining 170 miles of water mains, reading and maintaining more than 13,000 services, and the installation and repair of water mains, valves and hydrants. 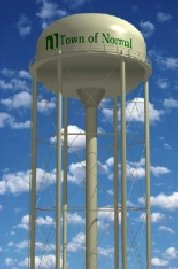 All of this activity was being accomplished with an outdated system containing RTUs that performed only minimal SCADA and licensed-frequency radios that sent data at a mere 300 bits per second. Overall, the system was complicated to understand, expensive to service and difficult to repair.

The water department turned to SCADAware, a local system integration firm, and expressed their desire for a new system, built from the ground up. In an effort to control costs, and allow the city to create, install, maintain, and repair its new system with minimal outside help, SCADAware’s president recommended a PC-driven, license-free, frequency hopping spread spectrum solution.

The water department’s new system now uses a primary and secondary server within its water treatment plant for HMI and PC-based control. The computers collect and monitor data from all of the city’s wells, tanks, and lift stations via a ProSoft Technology wireless serial network. Programmable Field Couplers allow water treatment personnel to make adjustments and activate controls. A SIXNET Ethernet-to-Serial is used to convert the incoming serial data to Ethernet, allowing the data to be accessed on the plant’s LAN.

“The monitoring of wells and tanks using the wireless network cut down on drive time and time away from the department,” said ProSoft’s Wireless Manager. “The sophisticated software alerts water department employees of problems, reducing response times.”

Although justifying upgrades of this nature can be very challenging for municipal departments, the team at the water department felt that this upgrade would have an immediate, positive economic impact on performance and efficiency. They were right.

“The easily administered SCADA system and the wireless network allowed the city to have the flexibility to upgrade and change their system as the need arises,” said a ProSoft Wireless Engineer. “Future expansion has now become more affordable for the water department. The present solution has also become much more efficient and less burdensome to maintain.”