An average person turns on his TV set with the simple push of a remote, after turning on the light in the kitchen, and grabbing a cold sandwich from the refrigerator.  Most people don’t think of where the electricity powering their light bulb, refrigerator, or TV is coming from, or the processes involved in producing the electricity.

Ships dock continually each day at the Gwangyang Harbor adjacent to South Korea’s Hadong Power Plant, transferring tons and tons of coal. Bucket after bucket carrying tons of coal from each carrier ship’s cargo area is then transferred via a conveyor that leads to the coal testing and analysis process, which is a very important part of the power plant’s operation.

Rocks of bituminous coal are measured for quality, a determinant of whether it is good fuel or not. Coal quality determines whether it will burn effectively, therefore generating maximum electricity and reducing plant maintenance.  The fewer impurities in the coal, the better it burns in the boiler. Impurities include ash, phosphorous, sodium, sulfur, and more, which can also cause problems with the coal plant’s boiler system.

“This processing is very important. It works to capture coal samples before they are input into the boiler,” said Kyungkoo Cho, Deputy General Manager for distributor Ajin Systech.

The Hadong Power Plant, operated by Korea Electric Power Company, produces 6 percent of South Korea’s electrical supply, making it a vital source of energy in the country that produces many of the world’s consumer electronics from companies such as LG and Samsung.

Construction of the plant began in 1993, with the first two coal units producing power. In subsequent years, six units have been added to the plant. 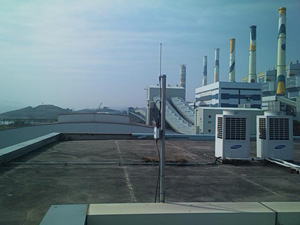 In 2009, power plant engineers faced a challenging decision. Should they lay more than 600 meters of costly fiber optic cable at the plant’s coal handling and testing area, or ditch the wire and use industrial hotspot radios? The solution was simple: Industrial wireless radios were surely the way to go in this aspect. Meters and meters of fiber optic cable would have been costly, and likely would have been time-consuming.

With wireless, there were concerns about signal strength around the plant. There had to be a good connection between each area of the wireless system. ProSoft Technology provided a cost-effective, strong signal solution for the Hadong Power Plant.

With ProSoft Technology’s Industrial Hotspots, the solution turned out to be an easy one for Ajin Systech, a South Korea distributor contacted by the power company.

Data is consistently and securely transferred between the radios. Plant engineers know at any minute whether the bucket and conveyor system transferring the coal that keeps the plant operational is moving smoothly, as ship after ship unloads valuable cargo. The coal is then input into the boilers, where the energy is converted into steam, passing through a turbine that generates the electricity that is added to the country’s power grid.

The person continues to watch the TV and eat his cold sandwich, as the compact fluorescent lamp above keeps the room bright. And it all started at a power plant somewhere, possibly with the unloading of coal from a bucket to a conveyor.